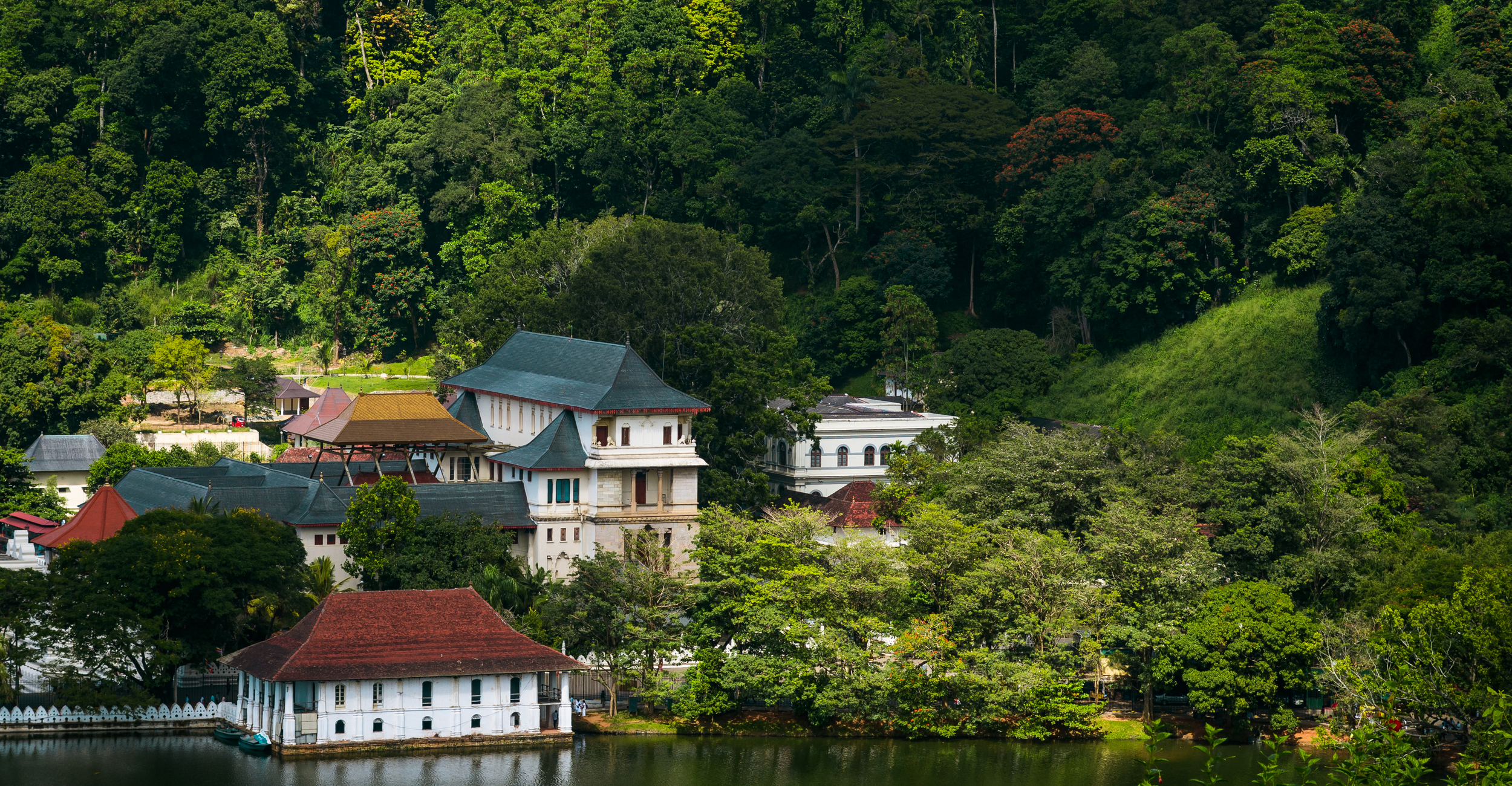 Top 5 things to do in Kandy

Kandy is Sri Lanka’s iconic bastion of history, culture and heritage.It was the stronghold of the last Sri Lankan Monarchs, defying invasions of the Portuguese, Dutch and British for nearly three centuries. The impenetrable forested mountains provided natural protection to autonomous Kandy whilst the coastal lowlands fell one after another, succumbing to occupant colonists. The coastal areas were heavily influenced by European culture thereafter. Kandy, however, was staunch and determined in its stance to protect the local culture, religion and traditions, which were fast eroding elsewhere in the island. However, a twist in the fate of Sri Lankan history brought about turmoil within the Kandyan King’s court. King Sri Vickrama Rajasinghe, the last Sri Lankan King to reign the land was deposed and handed over to the British by the Kandyan Chieftains (the king’s very own ministers and confidantes), following the signing of the Kandyan Convention in 1815, ratifying the end of independent local rule in the island. Thus ended Sri Lanka’s long and illustrious monarchical rule and royal lineage.

Modern day Kandy is a mellow and gentle city with unparalleled grandeur and charm. Home to Sri Lanka’s most sacred temple, a repository for traditional art and craft, the heartland of native culture and pageantry, a showcase of local and colonial architecture, a tapestry of scenic backdrops, landscapes and well-tended gardens; Kandy will never fail to impress. It is a quaint and timeless city swaddled in history and heritage, thus rightfully declared a UNESCO World Heritage Location.

The journey from Sri Lanka’s commercial capital Colombo, to Kandy on the A1 Highway is an engaging prelude to what awaits you, upon arriving at the iconic destination. You will pass intriguing towns and hamlets such as Cadjugama – famous for colourfully clad ladies selling mouth-watering roasted (and raw) cashews, Radawadunna – famed for woven cane products, busy Keggalle and a short detour thereon leading to the Pinnawala Elephant Orphanage and the views becoming increasingly breathtaking as you approach Kadugannawa Pass which serves as the entrance to the heritage city of Kandy.

Travelling on the E04 Central Expressway however is another option you have which will make your commute much quicker.

Our curated guide to ‘Top 5 things to do in Kandy’, presented in random order, will inspire you with ideas of activities to undertake and places to visit in Kandy, Sri Lanka’s iconic ‘Capital in the Hills’.

1) Visit the sacred Temple of the Tooth Relic

Located in the heart of the busy city of Kandy, the serene Temple of the Tooth Relic remains surprisingly tranquil and calm. The landmark white buildings of the temple complex stand resolute and meditative amidst the bustling chaos of the city. This iconic temple complex houses Sri Lanka’s most revered Relic of Gauthama Buddha. As you walk into the serene building of the temple the hustle and bustle outside seems to disappear almost miraculously. The large crowds of devotees and tourists jostling for space within the premise does not become a cause for agitation or panic either. A sense of inner calm prevails and the soothing fragrance of incense and flower offerings and the mesmerising chant of devotional prayers engulf your senses, as you behold the vision of the dazzling sacred casket from a distant vantage point at pooja time (daily offering and prayer times).

The best times to visit the temple are the three pooja times (5.30 am – 6.45 am, 9.30am – 11.00am, 6.30pm – 8pm), for a full experience of the rituals and rites performed. All visitors are expected to dress in modest attire (preferably white) covering shoulders and legs (up to knee level in the least). All headwear and footwear need to be removed when entering the temple.

Historic and religious sources narrate the origins of the relic in a captivating account. The sacred tooth, among many other relics were retrieved from the Buddha’s funeral pyre and enshrined in Kusinara by ruling kings and retained in India for eight centuries. However, following militant resurgences, which threatened the safety of the relic, it was brought to Sri Lanka, by Princess Hemamala and her spouse Prince Dhante, upon the request of King Guhasiva of Kalinga, the father of the princess. It is believed that the sacred relic was discreetly hidden within the lustrous, elaborately styled crowning glory of the princess, during their purposeful migration to Sri Lanka. The royal couple arrived in Anuradhapura where the revered tooth relic was first enshrined and retained for five centuries, before being moved to Polonnaruwa, Dambadeniya, Yapahuwa, Kurunegalle, Gampola and Kotte successively, in accordance with Sri Lanka’s shift of kingdoms, before finally arriving in its present day home, Kandy. It was believed that the sacred relic confers kingship to its custodian who is then the rightful ruler of the land. It is little surprise that the Tooth Relic was held in the inner chambers of the royal palaces, heavily guarded, discreetly hidden in a multitude of caskets and revered with daily rites and rituals by the Sri Lankan monarchs. The present Temple of the Tooth Relic in Kandy happens to be a section of the former palace of King Sri Vickrama Rajasinghe, Sri Lanka’s last monarch.

The temple complex consists of the Main Shrine which holds the Sacred Tooth Relic, the Aluth Maligawa with many Buddha statues and gifts from other Buddhist nations and well-wishers, the Audience Hall, the Sri Dalada Museum, the World Buddhist Museum and the Palace of Sri Lanka’s last king.

The areas west of the temple are accompanied by three of the most prominent devalas or shrines dedicated to deities Pattini, Natha and Vishnu. The fourth, Kataragama Devela, lies in the heart of the city centre. These four deities are considered the guardians of the city of Kandy and processions to honour them form an integral part of the Esala Pageant.

Kandy is the venue for Sri Lanka’s most colourful and vibrant religious pageant the Esala Perahera, which tours the city’s streets in July/August each year, in honour of the Sacred Tooth Relic. It is an important cultural event showcasing the temple’s tusker and about a hundred other dazzlingly embellished and caparisoned elephants and close to a thousand dancers, whip crackers, drummers, flag bearers and acrobats. The festival is celebrated for 10 days and the processions grow increasingly larger and more vibrant as it draws nearer to the final day.

The 60-hectare Royal Botanical Gardens, in Peradeniya (6km from central Kandy) is home to over 4000 species of impressive flora – avenues of towering palms, ginormous Javan Figs, intoxicatingly fragrant roses and technicoloured orchids being noteworthy. It was once the private reserve of Kandyan Royals. The British colonists subsequently converted the reserve into a Botanical Garden in 1843.

An excursion to the Botanical Gardens with a packed picnic at hand to keep your hunger pangs in check, is a wonderful way to spend a few hours in the scenic outdoors lulled by the cool breeze and sharing the vast premise with visiting families, school children, courting couples, mischievous monkeys and flying foxes dangling from tree branches.

Wander in amazement through the colourful labyrinth of flora framed by picturesque backdrops of mist laden hills; a delightful experience with ample opportunities for some Insta-worthy photos.

A 40-minute drive west of Kandy will take you to the historic sites of three temples, dating back to the 14th century. Most travellers visit all three temples in one excursion hence the term ‘Three Temples Loop’ is often used. All three temples/shrines feature heavy South Indian architecture.

Gadaladeniya Vihara, located 14km southwest of Kandy, in the suburb of Pilimathalawa, is an impressive temple located on a rocky outcrop. It was commissioned by King Bhuvanekabahu IV. The central temple building is built entirely of sculptured granite (except for the sikharas).

Travelling a few kilometres south you will arrive at the magnificent Gampola era Lankatilake Vihara, built atop a hillock, reached by a long flight of steps. It was built by King Bhuvanekabahu IV. Vibrant murals and intricate sculptures adorn the temple walls and ceilings. The original edifice is believed to have been four-storied, but only a three-storey building remains today. An elaborately sculptured Dragon’s Arch (Makara Thorana) with images of guardian deities, lies at the entrance to the shrine room, almost as if to protect the Buddha statues within.

Travel a further 3km southward and you will find the splendid Embekke Devale, dedicated to the Deity Kataragama. It was built by King Vickramabahu III of Gampola and consists of three sections – the ‘Sanctum of Garagha’, the ‘Digge’ (Dancing Hall) and the ‘Hevisi Mandapaya’ (Drummers Hall).

The Drummers Hall consists of impressive wooden pillars with intricate carvings showcasing highly skilled and diligent workmanship – it is noteworthy that no two carvings here are alike.

Udawatta Kele Forest Reserve or ‘Uda Wasala Watte’ (Garden above the Royal Palace) as it was known during the time of Kandyan Kings, is the exotic woodland that provides a flattering emerald-green backdrop to Kandy’s unique cityscape. It was a place of privilege during the time of the Kandyan Kingdom, serving the purpose of a ‘pleasure garden’ reserved for the exclusive use of the king, his harem, and other members of the royal family.

This 257-acre ecosystem teeming with exotic avifauna and many varieties of towering hardwood, lush lianas, rustling bamboo and a thick foliage of shrubs, was declared a forest reserve in 1856 and later became a sanctuary in 1938. Three reclusive Buddhist monasteries are located within the reserve.

Conveniently located in the heart of the city, this endowed urban reserve provides an ideal escape for visitors. A leisurely trek in this tropical woodland (approximately 5km round trip), shaded with a thick canopy, is a great way to escape the heat, hustle and bustle and workaday rush of the city of Kandy. It is an ideal mini getaway for birding and wildlife enthusiasts as many vibrant montane birds and frolicking monkeys call this reserve home. Avid bird watchers and trekkers can hire guides at the ticket office if a comprehensive interpretation of the forest is desired.

5) City/shopping tour and witnessing of a cultural show

A morning or evening stroll around the scenic manmade centrepiece lake is an experience every traveller to Kandy must savour. The lake, steeped in folklore and legend, was built in 1807 by King Sri Vickrama Rajasinghe. The total circuit around the lake is approximately 3km, along its promenade, shaded by trees for most of the way. According to local folklore, the island pavilion in the middle of the lake is believed to have been used by the king and his harem with secret tunnels leading all the way to the palace.

Boat trips on the lake are offered by a few service providers. It can get hot during the afternoon and showers are not unusual in Kandy – hence it pays to be prepared with appropriate sun and rain protection.

Visit the busy markets and shopping precincts of Kandy, which is an ideal way to experience the authentic local culture, people and lifestyle. You will find a variety of handicrafts, antiques, jewellery, textiles, clothing and souvenir items as you make your way through the narrow and winding thoroughfares of Kandy’s commercial and shopping hub.

An exploration of the busy Kandy market is ideal for those on the hunt for fresh local produce ranging from intriguing and colourful exotic fruits to vegetables, spices, fish, meat and street food.

Wind up your day’s explorations with an exuberant curtain closer – head over to one of the five cultural centres that have nightly performances, to witness a traditional cultural show. The combination of flamboyant costumes and embellishments, extraordinary masks, masterfully choreographed classical Kandyan dance ensembles (which include Vannam, Naiyandi, Udekki and Pantheru dances) and Low Country masked dances (Satirical Kolam and Exorcism dances), virtuoso drumming and show stopping fire breathing make up an engaging cultural show rarely experienced anywhere else in the island.