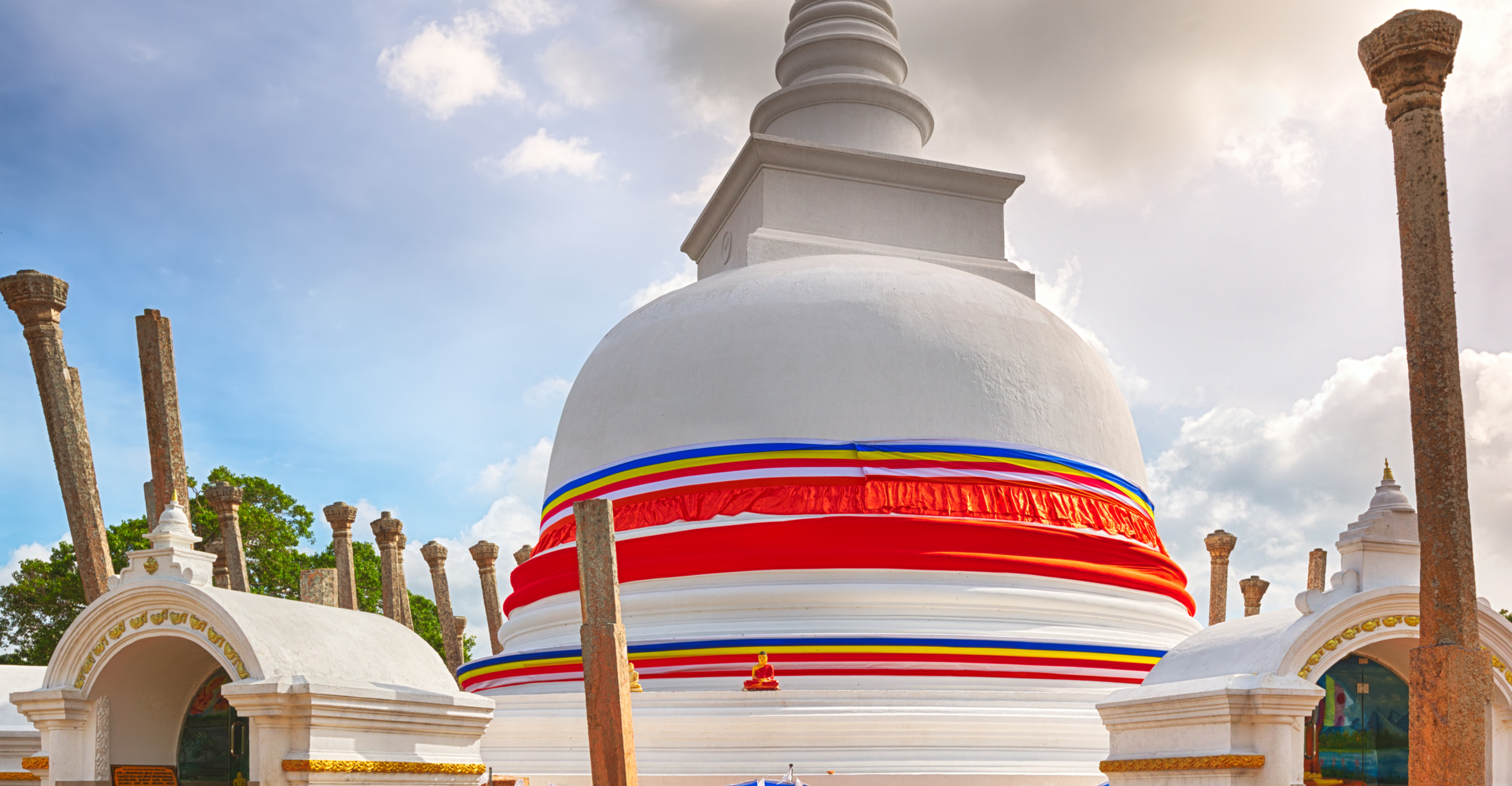 Leave for the Dambulla Cave Temples.

Dambulla Rock consists of more than 80 caves – five of which constitute the resplendent Golden Temple, which is a UNESCO World Heritage Site. It is also the largest and the best-preserved cave temple complex in Sri Lanka, housing a stupa, 153 Buddha statues, and a vast collection of other statues representing deities and kings. The cave walls and ceiling are adorned with intricate murals. These works of art cover a 2,100m2 area and showcase magnificent religious artistry at its best.

After breakfast leave for Anuradhapura, the heartland of Theravada Buddhism in Sri Lanka.

The Jaya Siri Maha Bodhi Tree was planted in the Mahamewna Gardens of Anuradhapura, from a sapling taken from the Bodhi Tree in Buddhagaya India, under which Lord Buddha attained enlightenment. It is the oldest documented and perhaps the most revered tree in the world.

The Ruwanweli Maha Seya was built by King Dutugemunu (161-137 BCE) and houses the largest deposit of the Gauthama Buddha’s relics. For this reason alone, it is one of the most sacred places of worship for the Buddhist world. Quite apart from the religious significance, its architecture, structural precision, and serene beauty are awe inspiring.

Thuparama, built by King Devanampiya Tissa (247 – 207 BCE), is believed to be the first dagoba in Sri Lanka and enshrines the sacred right collarbone relic of the Buddha.

Abhayagiri Vihara Complex is a UNESCO World Heritage Site. It is an ancient monastic complex built by King Valagamba (89 – 77 BCE). During its height, this epicentre of the Mahayana Tradition of Buddhism, is believed to have housed 5000 Buddhist monks. The development of Abhayagiriya reached its peak during the reign of King Mahasena (277-304 CE), by which time it had become a renowned Buddhist educational centre both locally and internationally.

Jethawanarama is the biggest of the ancient stupas in Sri Lanka. You can watch the colossal stupa and its 80-hectare compound in awe, from the King’s Garden, also called “Nandana Uyana”. King Mahasena commenced construction work on this monastic complex but did not live to see its completion; a feat which his son King Meghavanna-I (304-332 CE) later achieved.

Overnight at hotel in Anuradhapura.

After breakfast visit Mihintale Raja Maha Vihara. Climb to the summit of Mihintale – the 1800 low incline steps facilitating the climb will take you to an awe inspiring historic and religious complex populated with stupas, shrines, caves, and a magnificent Buddha statue overlooking the plains below.

Mihintale is the revered birthplace of Theravada Buddhism in Sri Lanka. It is on this mountain peak that King Devanampiya Tissa (307-267 BCE) met Arhat Mahinda, whilst on a deer-hunt on a full moon day in the month of Poson (June). India’s indomitable Mauryan Emperor Asoka sent Arhat Mahinda, his ordained son on this mission, to preach the doctrine of Buddhism to his dear friend, the king of Sri Lanka. It is believed that Buddhism took firm root in the island following this decisive meeting, as the king and his people embraced the doctrine with much fervour and devotion.

By afternoon visit the site of the Aukana Buddha Statue, a 40 feet sculpture carved out of a large granite rock. It is believed to be one of Sri Lanka’s best standing Buddha statues and was commissioned during the reign of King Dhatusena .

Overnight at a hotel in Polonnaruwa.

The Somawathiya Chetiya was built by King Kavantissa (205 – 161 BCE) and enshrines the sacred right canine tooth relic of Lord Buddha. The stupa is believed to have been named after Princess Somawathi, the sister of King Kavantissa.

Overnight at the hotel in Polonnaruwa.

After breakfast leave for Pasikudah. Check in at a luxury resort hotel in Pasikudah.

Pasikudah Bay & Beach is a sun-sea-sand paradise in the East Coast of Sri Lanka. It is endowed with an idyllic beach, a pristine natural bay with shallow crystal-clear water, an exotic coral reef teeming with colourful marine life, and lavish accommodation. Look forward to scrumptious banquets with an array of gourmet seafood platters and ample opportunity for lounging at the beach.

Overnight at selected hotel in Pasikudah.

Overnight at hotel in Pasikudah.

Ridi Vihara Temple was constructed by Sri Lanka’s eminent King Dutugemunu (161 – 137 BCE). It is believed to be the place where the silver ore which provided silver to complete the Ruwanweli Seya in Anuradhapura was discovered.

Kelaniya Raja Maha Vihara is built on the precise location of Lord Buddha’s stay, during his third visit to Sri Lanka, following an invitation by the Naga King Maniakkhika. The temple is also famous for its colourful Duruthu Maha Procession which takes place on the Duruthu Poya Day in January each year.