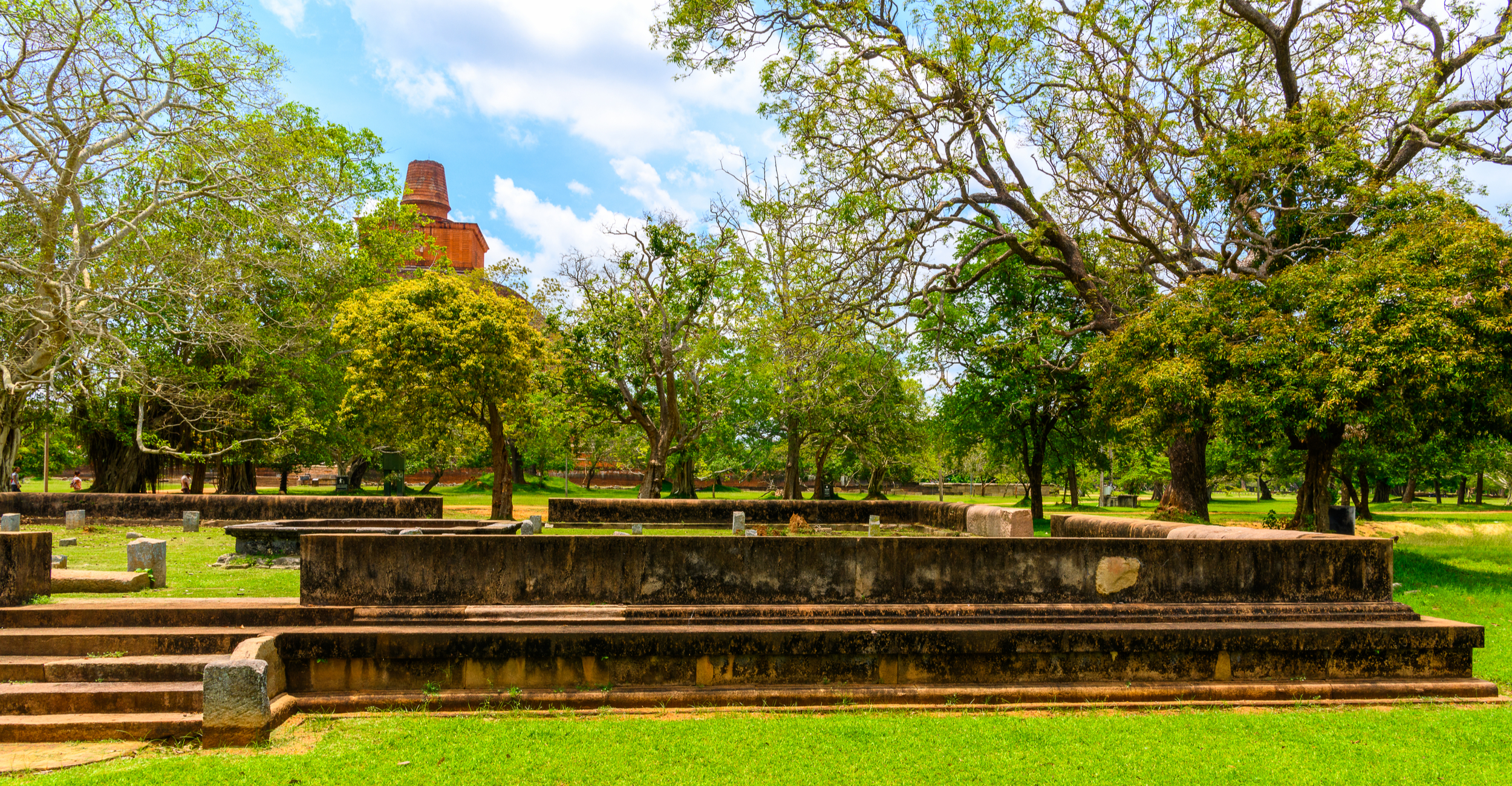 Upon arrival at the airport, you will be met by our friendly English-speaking Chauffeur Guide and transferred to a hotel in the buoyant beach town of Negombo.

Relax and unwind in the comforts of your hotel.

After breakfast, leave for the agrarian village of Dambulla. Visit the Pinnawala Elephant Orphanage en-route.

Visit the resplendent Golden Cave Temple of Dambulla, a declared UNESCO World Heritage Site. The origins of this historic temple, housed in the recess of the majestic 160m Dambulla rock, dates to the time of King Valagamba (89 – 77 BCE). It is the largest and best-preserved historic cave temple in Sri Lanka, adorned with breathtaking murals occupying a 2100m2 area of the cave walls and many statues depicting the Buddha, deities and kings.

After breakfast leave for the impressive UNESCO World Heritage Site of Anuradhapura.

Anuradhapura was Sri Lanka’s most distinguished capital city that endured for well over a millennium (377 BCE – 1017 CE) under the monarchical rule of 113 kings. It is the unparalleled heartland of Sri Lanka’s early Buddhist civilization and claimed to be one of the most impressive monastic cities of the ancient world. Encompassing an area of 660km2, the surviving ruins of this ancient capital constitute a rich collection of architectural, irrigation and engineering wonders which are awe inspiring and staggering in scale, even by modern standards.

Overnight at a selected hotel in Anuradhapura.

After breakfast leave on an excursion to the UNESCO World Heritage Site of Sigiriya.

The impregnable citadel and palace complex in Sigiriya, sprawled atop a majestic 200m high rock, is the work of the tyrant king Kashyapa I, who feared the vengeance of his brother Moggallana, the rightful heir to the throne, whom he deposed and exiled, after torturously murdering their father King Dathusena (455-477 CE) of Anuradhapura. Moggallana eventually defeated Kashyapa in battle in 495CE and reclaimed the throne. Thereafter, victorious Moggallana handed back Sigiriya to its original residents, the reclusive Buddhist monks.

In the afternoon leave for Polonnaruwa.

Polonnaruwa, rose to significance as Sri Lanka’s capital in the 11th century CE, after the fall and abandonment of Anuradhapura. At the height of its glory, Polonnaruwa was a grand capital city consisting of splendid palaces, sprawling Buddhist monasteries and temples, colorful Hindu shrines, marvelous works of art including stone carvings and sculptures and an impressive irrigation system complete with expansive reservoirs and a labyrinth of canals that provided the much needed hydration to its prosperous agrarian economy. The impressive ruins of this ancient city remain today, showcasing its past glory. In recognition of its historic value and archeological significance, Polonnaruwa has been declared a UNESCO World Heritage Site.

Overnight at a selected hotel in Habarana.

After breakfast leave for Kandy, the legendary capital of the last Kingdom of Sri Lanka. Visit the sacred Sri Dalada Maligawa (Temple of the Tooth Relic), Gadaladeniya Temple and the Embekke Dewalaya.

Nestling in the impenetrable and rugged central hills of the island, Kandy managed to repel European colonial invasions for nearly three decades, before finally falling to British rule by decree, in 1815.

Kandy is Sri Lanka’s undisputed historic bastion which stubbornly clung to native religious and cultural values and traditions, even during the times of heavy western colonial influence and deep turmoil that followed. To date, this vibrant heritage city remains a preference point for religion, traditional art and craft and cultural pageantry.  A city not to be missed in your travels in Sri Lanka.

The Dalada Maligawa houses the enshrined tooth relic of Lord Buddha and is considered one of the most sacred places of worship, by Buddhists world over. The tooth relic was retrieved from the Buddha’s funeral pyre and preserved in the ancient Kalinga Region of India. Later, in the 4th Century CE, it was brought to Sri Lanka for safekeeping, by Prince Dantha and his consort Princess Hemamala. The sacred relic was believed to have been discreetly hidden within the princess’s lustrous, elaborately styled hair, during this purposeful journey to Sri Lanka.

The Gadaladeniya Vihara is considered one of the largest rock temples in Sri Lanka and was commissioned by King Bhuvanekabahu IV in 1344.

The 14th Century Embekke Dewalaya temple is a stunning religious, architectural, and artistic showpiece built by King Vickramabahu III. The temple presents an exquisite display of medieval architecture and splendid woodwork and carvings, making it a popular tourist destination.

Witness a cultural dance performance in the afternoon. Overnight at a selected hotel in Kandy.

En-route visit the 109m Rambode Falls and a verdant tea plantation and factory.

Overnight at a hotel in Nuwara Eliya.

After breakfast leave for an excursion to Horton Plains, a UNESCO Natural World Heritage Site. Visit Baker’s Falls and the World’s End Escarpment.

Located 2100m above sea level, Horton Plains contains a staggering 3100 hectares of montane grassland and cloud forest rich with diverse species of flora and fauna, making it a popular attraction for many leisure travellers, avid nature lovers and researching specialists such as Botanists, Zoologists and Geologists. The scenery surrounding Horton Plains is breathtaking and the rapidly changing weather unpredictable.

Overnight at a hotel in Nuwara Eliya.

Spend the rest of the day at leisure. Overnight at a selected hotel in Arugam Bay.

After breakfast leave on an excursion to the Lahugala Kitulana National Park, famous for its elephant population and vibrant birdlife.

Overnight at the hotel in Arugam Bay.

A full day of leisurely lounging by the beach with the opportunity of surfing.

Overnight at the hotel in Arugam Bay.

Overnight at a city hotel in Colombo.

After breakfast you will be taken on a guided tour of the city of Colombo.

Spend the afternoon at leisure, preparing for departure.