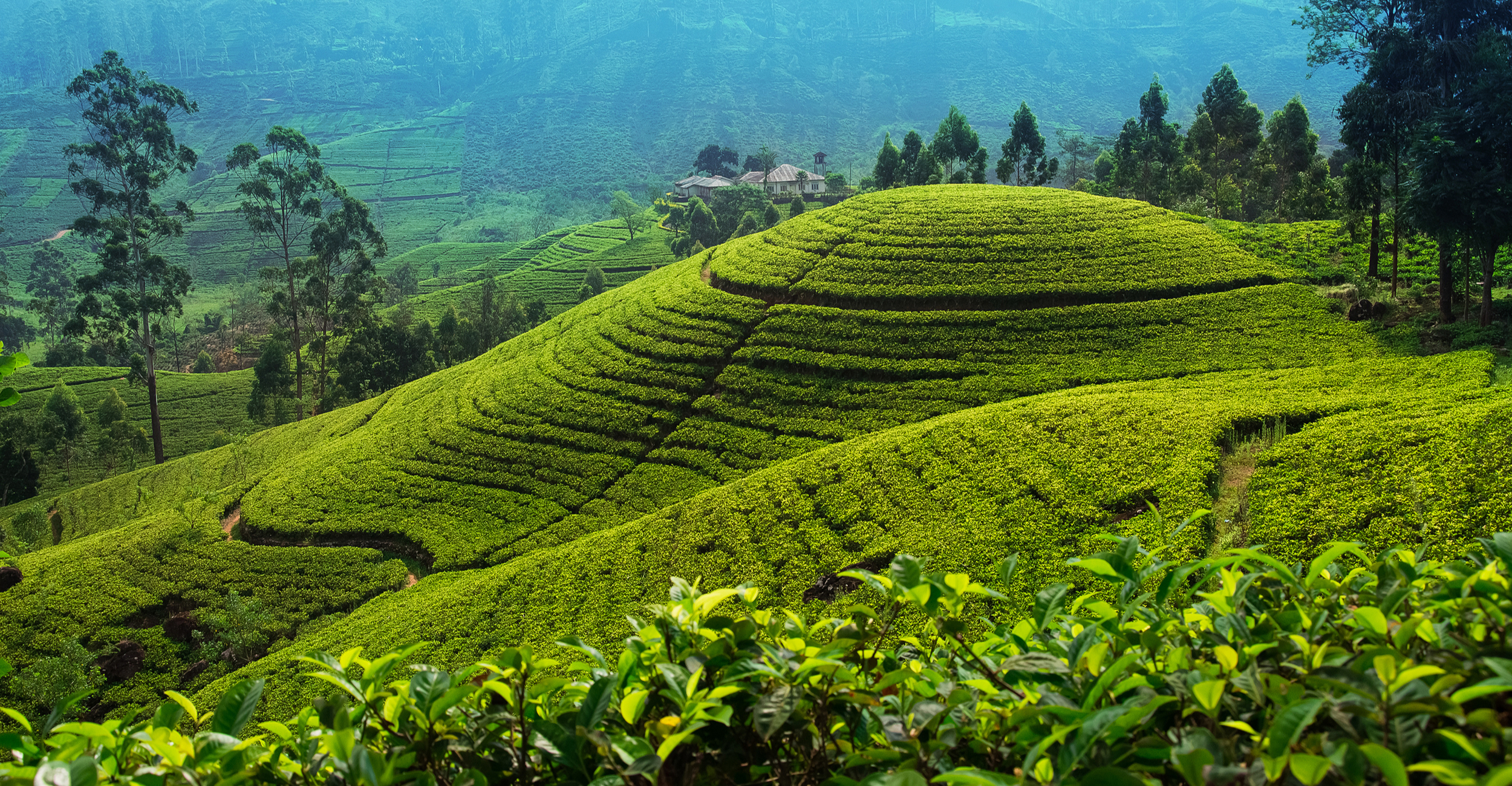 Nuwara Eliya lies at an altitude of 1868m above sea level, in the central highlands and has distinct features that set it apart from the rest of the island. Its salubrious sub tropical highland climate dictates annual temperature averaging between 11° C – 20° C. The dense green mountains of pristine cloud forests rise in all directions enveloping the city of Nuwara Eliya whilst breathtaking waterfalls plunge from its precipitous cliffs. While Sri Lanka’s lowlands bask in an endless tropical summer, the cool highland retreat of Nuwara Eliya is swathed in a temperate spring, dipping to an autumnal chill at night.

The mountain slopes of this famed ‘tea capital’ are carpeted with lush emerald plantations that glisten in the sun, through the shrouds of perpetual mist. The colourfully clad tea plantation workers carefully pick the tender ‘two leaves and bud’; the soulful ingredient that goes into making the characteristically aromatic and flavourful ‘Ceylon High Grown Teas’, enjoyed by many tea lovers world over.

The unique climate not found elsewhere in the country, coupled with breathtaking landscapes, attracted the many British Civil Servants and Planters of the colonial era to Nuwara Eliya. Stumbling upon this exciting destination, whilst exploring the impenetrable and rugged mountain wilderness, the homesick colonists went into fervent frenzy, converting it into a “home away from home”, later dubbed “Little England”. The mountain slopes were cultivated with their desired brew, ‘tea’ (with the failure of the coffee crops due to disease) and other temperate European vegetables and fruits such as carrots, beetroot, leeks, lettuce, cabbages, potatoes and strawberries. The British went onto replicate an alluring ‘English village’ in Nuwara Eliya, by constructing Tudor style manors, bungalows and neo – Gothic churches and creating carefully manicured hedgerows and beautifully tended gardens teeming with roses. The legacies of these colonial initiatives still remain in Sri Lanka’s railway system, colonial heritage buildings which have been restored and converted into some of Nuwara Eliya’s finest hotels and the world famous ‘Ceylon tea’, one of the mainstays of economy.

Nuwara Eliya is overlooked by Pidurutalagala, the tallest mountain in Sri Lanka. Victoria Park of Nuwara Eliya with its colourful tapestry of flowers and well manicured lawns is one of the country’s most beautiful and well-maintained town parks. It is also home to several hill country bird species. The Galway’s National Park which lies a few kilometres east of the town centre is primarily a patch of montane forest which is home to several bird and mammal species such as buffalo, wild boar, and barking deer.

Quite apart from its own charm, Nuwara Eliya is also an ideal base to explore the fascinating hinterland. Probably the most popular of such destinations is the UNESCO Natural World Heritage Site of Horton Plains; a misty and windswept plateau, covered by grassland and patches of thick forest, small waterfalls, placid lakes and rocky outcrops; flanked by Sri Lanka’s second and third highest mountains, Totupola and Kirigalpotta.  Horton Plains offers excellent hiking routes; the most popular trail leading to the stunning viewpoint of the World’s End escarpment.

Established in 1860, the Hakgala Gardens, 10km southeast of Nuwara Eliya,  is a delightful Botanical retreat. Its star features include the vibrant orchid collection, colourful and intoxicatingly fragrant rose garden, tranquil Japanese garden and refreshing cedars and cypresses. The gardens are legendarily associated with Hanuman, the Monkey God of the Indian Epic Ramayana.

The colourful Seetha Amman Temple, 7km southeast of Nuwara Eliya, is yet another site associated with the events of the Ramayana. The temple is said to mark one of the spots where Sita was held captive by the King Rawana. A darkened patch of soil near the temple is said to be the result of Hanuman setting fire to his surroundings in a frenzy of pain and rage, after Rawana set his tail on fire. This temple is often visited by Hindu wedding parties.

The present town of Nuwara Eliya is an interesting architectural mix – modern constructions vying for attention against their stately colonial era counterparts. There are many heritage buildings that have been converted to beautiful luxury hotels, which preserve most of their old world charm. During the month of April, many holidaymakers travel to Nuwara Eliya to enjoy the balmy spring like climate and to witness the famous motor and horse racing events. This time of the year brings about a ‘spring carnival ’ atmosphere to otherwise tranquil retreat of Nuwara Eliya, with celebrations taking place outdoors as well as within the luxury hotels that host many popular events. The season culminates in the nine-furlong Governor’s Cup at the Racecourse, many Golf Tournaments hosted by the Nuwara Eliya Golf Club and the colourful ‘Flower Show’ that marks the end of the seasonal celebrations.