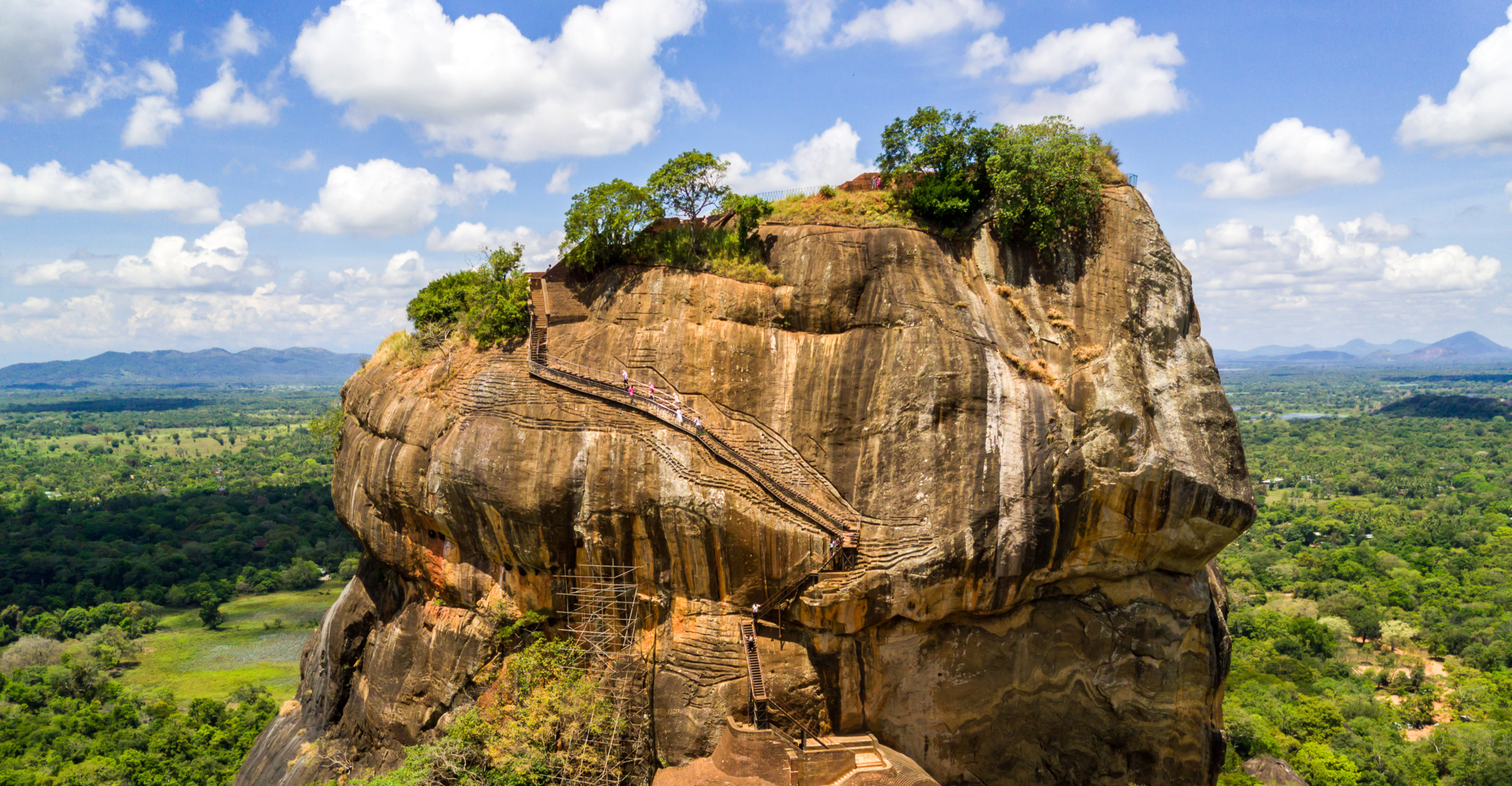 Sigiriya, a ‘UNESCO World Heritage’ site, is located in the disctrict of Matale, in the Central Province of Sri Lanka. It was a long established Buddhist monastic site until the 5th Century CE when King Kashyapa I (477 – 495 CE) chose the intriguing location to build his ‘citadel-in-the-sky’, sprawled atop a majestic gneiss rock that solemnly rises 200m above the surrounding dry zone terrain. This impregnable citadel was the haven of the tyrant patricidal King Kashyapa, who obsessively feared the wrath and vengeance of his brother Moggallana, the rightful heir to the throne, whom he deposed and exiled, after torturously murdering their father King Dathusena (455-477 CE) of the Royal Moriyan Dynasty in Anuradhapura.

King Kashyapa commissioned his palace encompassing the whole of the plateau on top of the rock, adorning it with pools, ponds, fountains,  boulder gardens, terraces, courtyards  and  mesmerizing galleries of the sublime ‘Sigiri Damsels’ frescoed in the recesses of the near vertical rock surface.

The upper decks of the palace are accessed by way of passageways cut into the rock face between a monumental pair of lion paws. The present-day remnants of the paws are tell-a-tale signs of the original size, scale and majesty of this grand leonine entrance which represents a recumbent lion made of brick.

The strikingly naturalistic and sensuous frescos of the Sigiriya Damsels commissioned by Kashyapa are painted onto the sheer rock face. There is much debate about the identities of the remaining twenty-one damsels who are believed to represent only a small fraction of the original gallery which consisted of five hundred maiden form frescos. Some believe these murals feature celebrated beauties of Kashyapa’s court while others believe they depict ‘Apsaras’ (celestial nymphs).

The highly polished Mirror Wall, covered with thousands of ancient graffiti, written by visitors who came to see the murals and marvels of Sigiriya, capture their intense feelings and impressions with simple yet earnest works of literature, written in early Sinhalese and Sanskrit languages.

The plains immediately surrounding the rock were flanked in all four directions with ramparts and edifices. The entire complex was fortified with stone perimeter walls, strategic sentry points and moats on all sides of the massive 1.5-hectare castle complex. Transporting the millions of bricks to build the castle along the 200m vertical rock-face would have been an arduous task.  Thus, the staggering scale of Sigiriya’s architectural and structural engineering feat is apparent to any modern-day observer.

Kashyapa’s self-proclaimed kingship ended when the long-anticipated invasion by Moggallana finally materialised in 495 CE. Kashyapa committed suicide in battle when his troops retreated leaving him at the mercy of his enemies. Victorious Moggallana, the rightful successor to the throne gifted Sigiriya back to the monastic Buddhist monks who occupied the site until its abandonment in 1155.

This short lived yet remarkable medieval capital of Sri Lanka, with its bitter-sweet tale of family feuds, turmoil, tyranny, glory and defeat, remained largely forgotten and abandoned until it was rediscovered by archaeologists and historians in the 19th Century. Sigiriya is undoubtedly one of the most visited historic attractions in Sri Lanka, with many seeking to witness and relive the extraordinary life and times of the tyrant king with a streak of brilliance and a murky reputation.