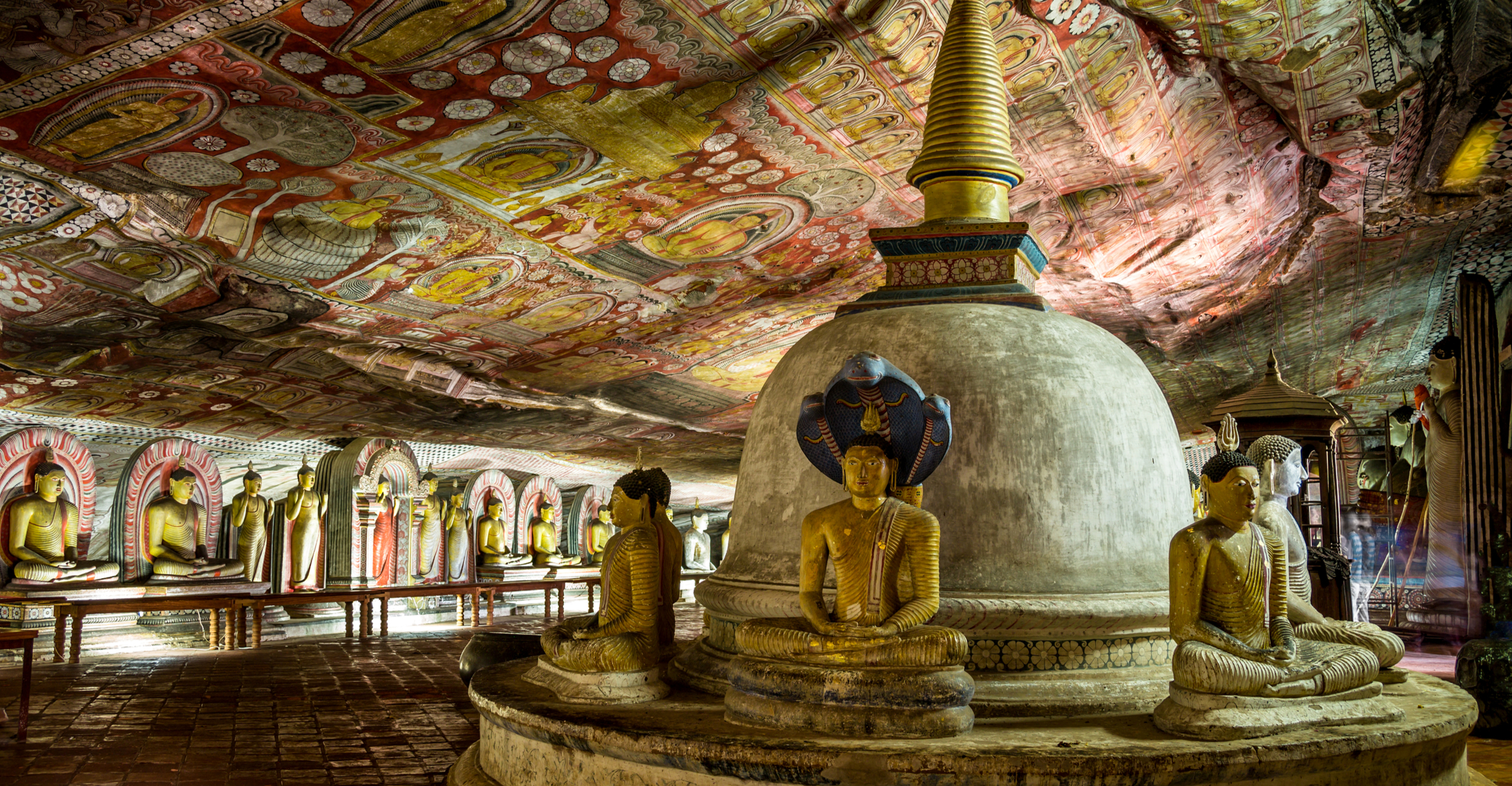 The unassuming agricultural town of Dambulla is located in the Central Province of Sri Lanka, 148 km from the Capital City of Colombo. Its iconic landmark, the majestic Dambulla Rock, towers over the surrounding plains, with the highest point reaching 160m; housing more than 80 caves. Five of these caves constitute the resplendent Golden Temple, which is a UNESCO World Heritage Site. It is also the largest and the best-preserved cave temple complex in Sri Lanka. The cave temple houses 153 Buddha statues and an array of other statues of deities and kings. The cave walls and ceiling are adorned with breathtaking murals. These surprisingly well-preserved works of art cover more than  a 2,100m2 area and showcase incredibly talented artistry.

Recorded history narrates that King Valagamba I took refuge in this cave complex for 14 years after being driven out of his kingdom in Anuradhapura by South Indian invaders, just five months after his coronation as king in 103 BCE. Seven invaders ruled Anuradhapura successively, until the rightful king reclaimed his throne with the support of the Buddhist clergy, establishing unitary rule once more. King Valagamba I ruled for 12 years (89 – 77 BCE). During this period, he also constructed the Abhayagiri Monastery Complex in Anuradhapura.

From time to time many royal patrons such as those of the Kandyan Nayak Dynasty restored and further embellished this temple complex. The most notable being King Kirti Sri Rajasinghe, who commissioned most of the murals and statues seen today. The Buddhist monastery complex that developed around the caves of Dambulla remains under the guardianship of the Buddhist clergy to this day.

To fully appreciate the history of the town of Dambulla, one must view it in the context of Ibbankatuwa, a village just 5 km away; where in 1970, archaeologists found one of the world’s oldest human burial sites, dating back to the megalithic prehistoric and protohistoric periods of Sri Lanka (700 – 400 BCE). The site consists of 42 burial clusters, each containing approximately 100 tombs. These were unearthed in an area of 6 hectares, which gives ample evidence that a reasonably populated early human settlement existed in close proximity to the Dambulu Oya stream.