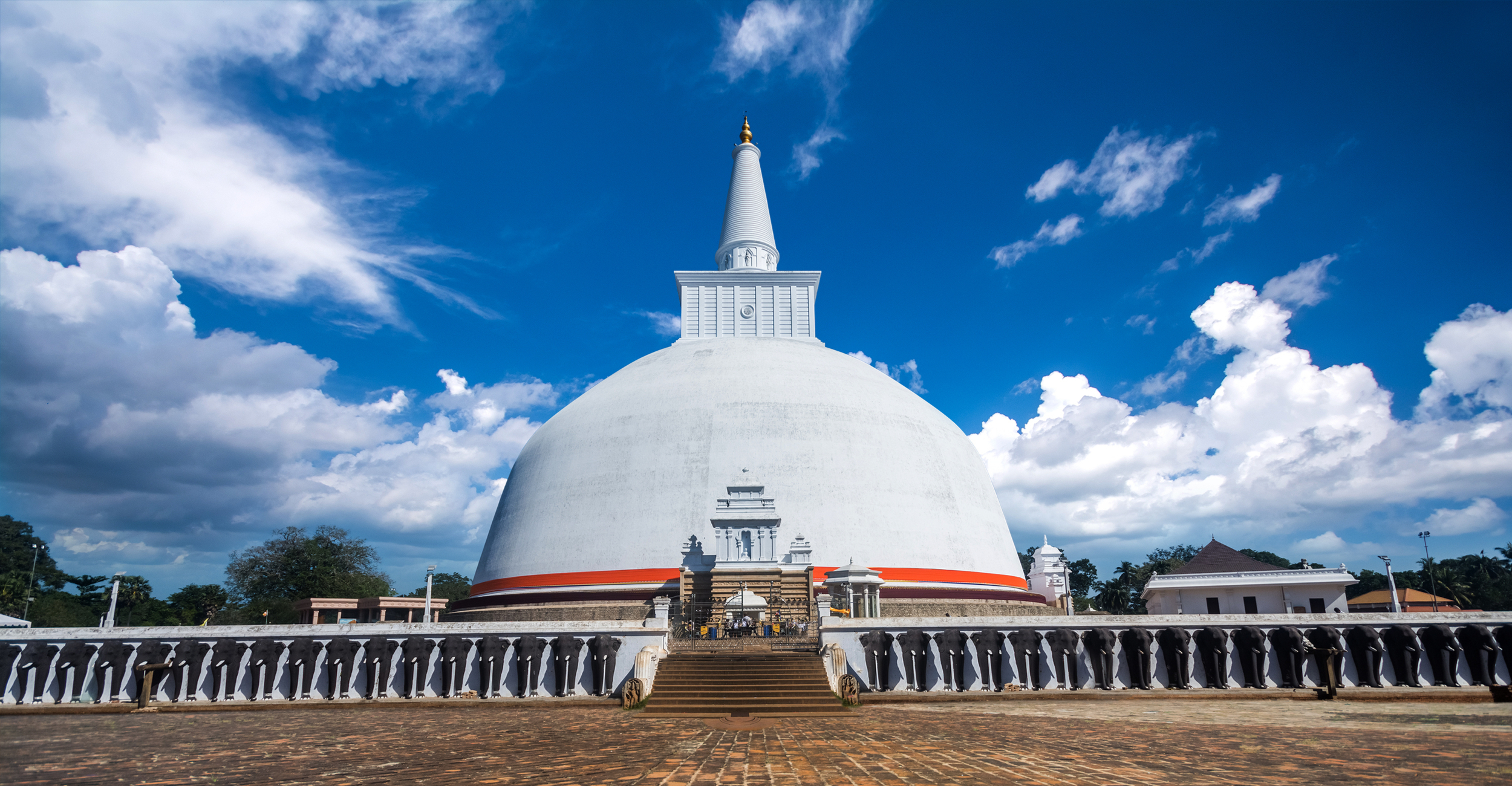 At the height of its glory, the Kingdom of Anuradhapura is compared with Nineveh and Babylon in its colossal proportions. Each of its four peripheral walls were 26km long, enclosing an area of 676 sq. km. The splendor of its Buddhist shrines, temples, monasteries, palaces, pleasure gardens, tanks, reservoirs, sculptures, monuments and an ingenious irrigation system with an elaborate network of water channels and sluices, showcase architectural and engineering brilliance that is awe inspiring and significant even by modern standards. The city’s three colossal stupas are among the largest monumental constructions of the ancient world, surpassed only by the Egyptian Pyramids of Giza.

The UNESCO World Heritage Site of Anuradhapura is the heartland of Sri Lanka’s early civilization and endured as a royal capital for well over a millennium (377 BCE – 1017 CE) under the monarchical rule of 113 kings.

This monastic capital and its legacy were predominantly shaped by the influence of the three main secular fraternities of the Buddhist Sangha (monks) of the time – namely the Mahaviharavasi, Abhayagirivasi and Jethawanavasi communities.

The Mahavihara sect, adopted an orthodox form of practice which centered around the Mahavihara monastic complex; founded during the reign of king Devanampiya Tissa (307-267BCE). Following the arrival of the missionary monk Arhat Mahinda , King Devanampiya Tissa set the precedence for a long tradition of interdependence and goodwill among the sovereign, the people, and  their religion. The arrival of the revered Siri Maha Bodhi sapling from Bodh Gaya – India, the widespread acceptance of Buddhism and commissioning of places of worship such as Buddhist shrines, stupas, and temples took place during this period, marking a great religious and cultural renaissance.

The birth of the Abhayagiri chapter of Anuradhapura saw state patronage move towards Mahayana (unorthodox) Buddhism. Under the sponsorship and patronage of King Valagamba (89-77 BCE), the Abhayagiri Monastic Complex rose to significance. The monks at Abhayagiriya enjoyed special state privileges. For centuries thereafter, Sri Lanka became a knowledge hub to the world in the spheres of Buddhist education, medicine, engineering and science.

The third phase of religious influence was during King Mahasena’s reign (277-304CE), under whose royal stewardship the Jethavana Monastic Complex flourished. The influence continued through to the Polonnaruwa period with kings such as Vijayabahu I and Parakramabahu the Great developing Sri Lanka not only in the spheres of religion, education, engineering and medicine, but also in irrigation and town planning; becoming a prosperous nation dubbed the ‘Rice Bowl of Asia.’

The regal Kingdom of Anuradhapura endured 1454 years, from the reign of King Pandukabaya to the last Sinhala King Mahinda V who assumed the throne in 1001 CE; but was captured by the Chola invaders and deported to India in 1017 CE, where he later met his death. Even though his son King Kassapa VI ascended the throne and ruled from a base in the south of the country, the Cholas invaded and gained control of Anuradhapura in 1017CE and began vandalising and looting the city, plundering its wealth. This period of destruction saw the rule of the kingdom change hands six times in short intervals until 1055CE, by which time, the battered city of Anuradhapura was abandoned and the capital had moved to Polonnaruwa. King Vijayabahu I (1055-1111 CE) later banished the Cholas and re-established Sinhala monarchical rule over the entire island, making Polonnaruwa the new capital; marking the end of the glorious and illustrious era of Anuradhapura.

Modern day Anuradhapura remains a sacred pilgrimage city for Sri Lankan Buddhists, where most ancient religious sites are the focal point of their revered homage and devotion. Despite its impressive past, the present city is charmingly subdued, minimalistic and almost contemplative. Despite this gentle demeanor, Anuradhapura’s fascinating history and heritage and its staggering archeological, architectural and engineering marvels make it one of Sri Lanka’s most impressive and captivating destinations.