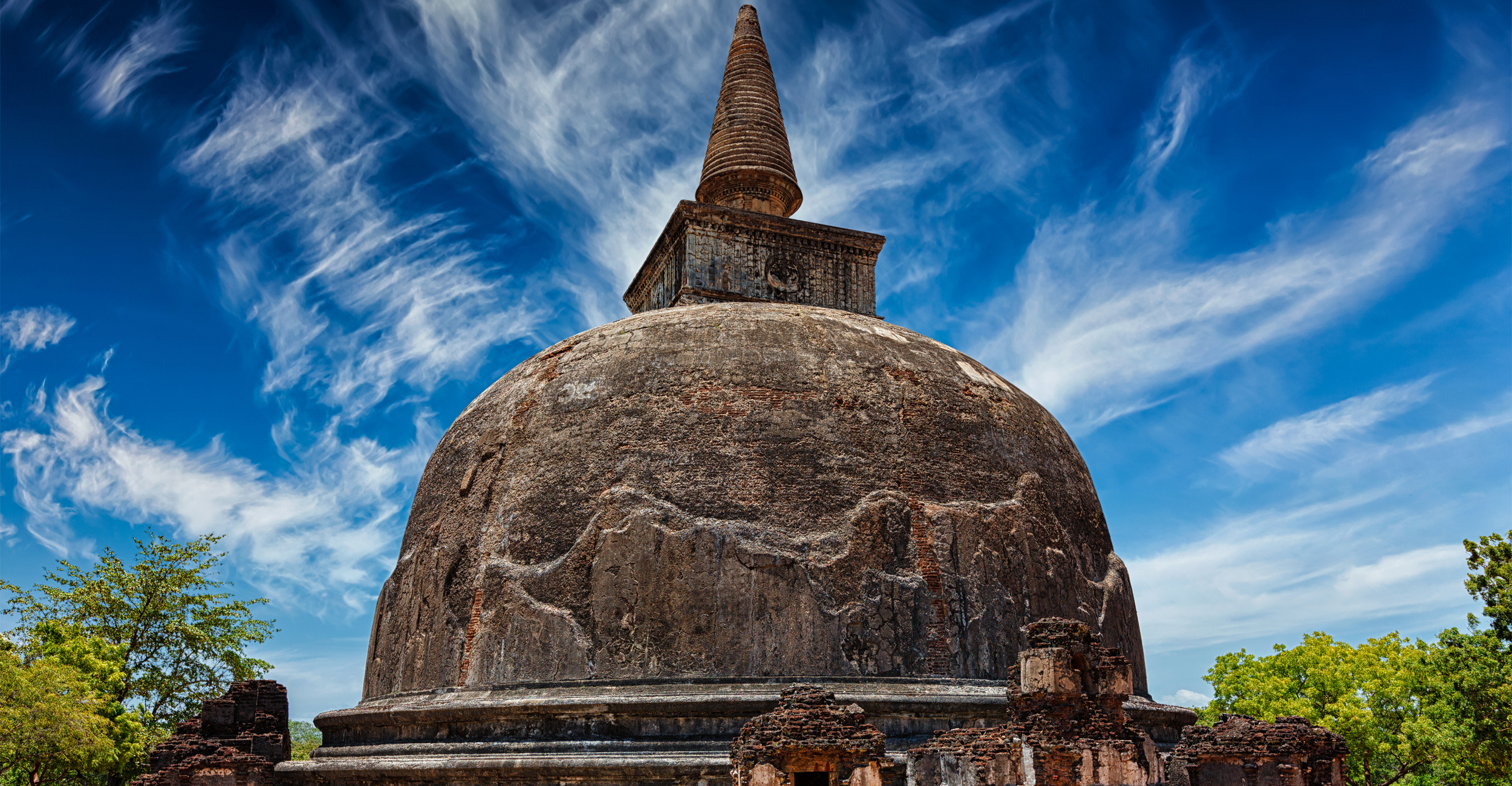 The ancient city of Polonnaruwa is located in the North Central Province of Sri Lanka, 230km from the capital of Colombo.  At the height of its glory Polonnaruwa stretched for many kilometres along the eastern side of the expansive Parakrama Samudraya reservoir and was encircled by sturdy protective walls. Within the confines of its boundaries was a well-planned city with splendid palaces, tranquil Buddhist monasteries and temples, colourful Hindu shrines, intricate works of art including carvings and sculptures and expansive reservoirs and irrigation systems.

For nearly two centuries, this kingdom was subjected to intermittent political turmoil, contention and power struggles between the local Sinhalese monarchs and the ambitious South Indian invaders. Hence the kingdom was heavily influenced by both Sinhala Buddhist and South Indian Hindu cultures. The quintessential features of Sinhala Buddhist culture, art and architecture are apparent in the temples, monasteries, and other religious monuments. The Hindu influence saw the birth of many temples and shrines devoted to deities such as Siva and stipulated certain changes to art and architecture of the Polonnaruwa era; such as the removal of oxen (the ox is considered a sacred beast in Hindu belief) carvings from the Moonstones (steppingstones) which were built at entrances to important buildings.

Following the abandonment of the Kingdom of Anuradhapura in 1017 CE, the invading Chola King Raja Raja and his son Rajendra, took the reigning King Mahinda V (1001-1029 CE) captive and exiled him to India where he met his death subsequently. The troubled times between 1017 and 1055 CE saw six South Indian rulers taking charge, one ousting the other, in their bid to remove the larger loot from the prosperous city of Anuradhapura with its 1400-year-old legacy.

After plundering and vandalizing Anuradharupa, the Cholas shifted the capital to Polonnaruwa and ruled Sri Lanka from this newfound city. The longest reigning Chola, Loka, ruled for six years whilst others only secured much shorter terms.

Subsequently, King Vijayabahu I (1055-1110 CE), born to a Sinhalese royal bloodline in Ruhuna (southern Sri Lanka) captured Polonnaruwa, ending the Chola rule and uniting the island under a unitary local monarch once more. He is also credited with the resurrection of Buddhism which suffered heavily during Chola rule, by bringing in monks from Myanmar to conduct ordination and to teach the doctrine.

Sinhalese monarchs ruled the country from the capital city of Polonnaruwa from 1055 to 1212 CE. During this period, the Kingdom of Polonnaruwa rose to international fame too, with the commissioning of expansive irrigation systems and massive agricultural and international trade accomplishments.

King Parakramabahu I (1153 – 1186 CE) is undoubtedly one of the most eminent kings of the Polonnaruwa era. During his illustrious reign, Sri Lanka was dubbed ‘The Rice Bowl of Asia,’ as the country went on to export its excessive and abundant cultivation of rice to many other countries in the region. He constructed extensive irrigation systems, reformed Buddhist practices, commissioned expansion and embellishment of the capital, reorganized the local army, and traded extensively with China, Myanmar and the Middle East whilst commanding his own fleet of ships numbering in the thousands.

With the demise of the valiant king Parakramabahu I, once again trouble befell the country. South Indian invasions resumed during the reign of Queen Lilavati, the widow of King Parakramabahu I (1211-1212 CE). Parakrama Pandyan II from the Pandyan Kingdom of India invaded Polonnaruwa and ruled the Kingdom from 1212 to 1215 CE. He was succeeded by Kalinga Magha who ruled until he was banished from Polonnaruwa in 1236 CE. With Polonnaruwa being subject to a succession of South Indian invasions, the Sinhala dynasty moved further southwards to Dambadeniya in the 13th Century CE, where Vijayabahu III (1220-1224 CE) established his kingdom.

With the appalling state of vandalism and the centre of Sinhalese rule gradually shifting southwards, both Anuradhapura and Polonnaruwa were deserted and forgotten. Soon these great cities were overrun by dense forests until their rediscovery in the early 19th Century.

Today Polonnaruwa is a designated UNESCO World Heritage Site. It is a popular stop in the itineraries of most travellers who are intrigued by the historic and cultural heritage of this ancient regal capital.